What? An all matte palette? For £4? Yeah, this is totally what Naked Basics should have looked like, don’t you think? This palette is another gem from Makeup Revolution (a brand which I am now ever so slightly obsessed with, by the way) which I’ve been testing out for a couple of days now so I thought it was about time I wrote a little review! *Or tried to. I apologise in advance for this post, it’s kind of a mess* 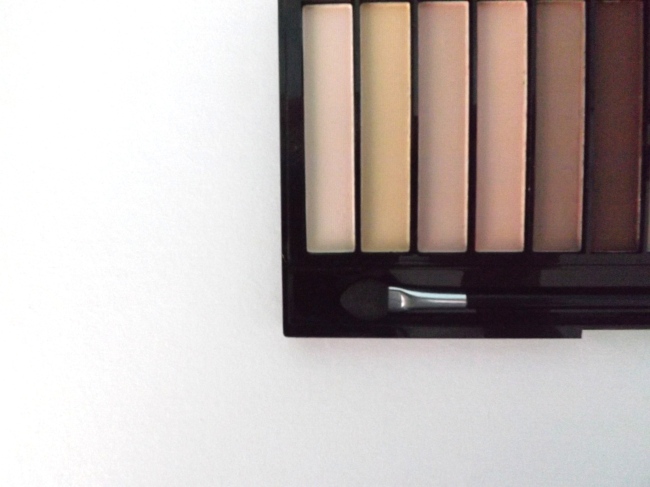 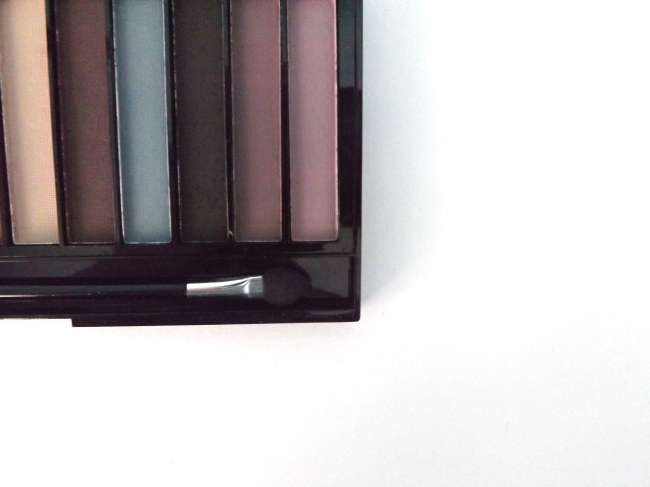 I’m so happy with the colour selection! I think it would have been pretty easy for Makeup Revolution to have filled up this palette with various shades of brown, but there are actual, wearable colours here. Including purples. I have such a thing for purple eye shadows.

The only thing I don’t love about the shades are that the first four are actually very, very similar (see swatches below), and I feel like one or two of them are only there so this can be a Naked Basics dupe- see what I mean?! 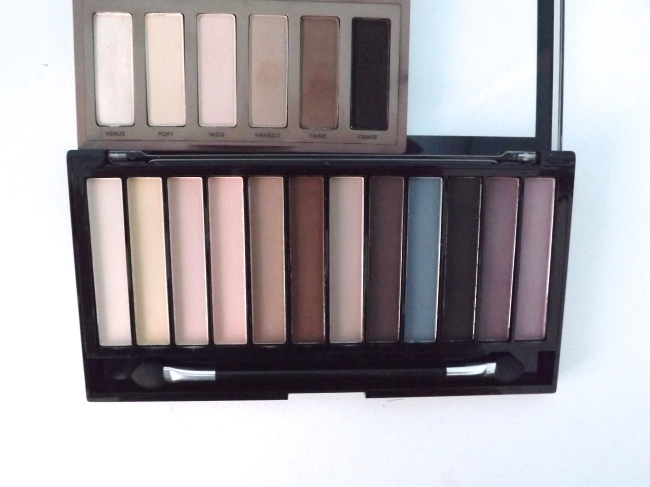 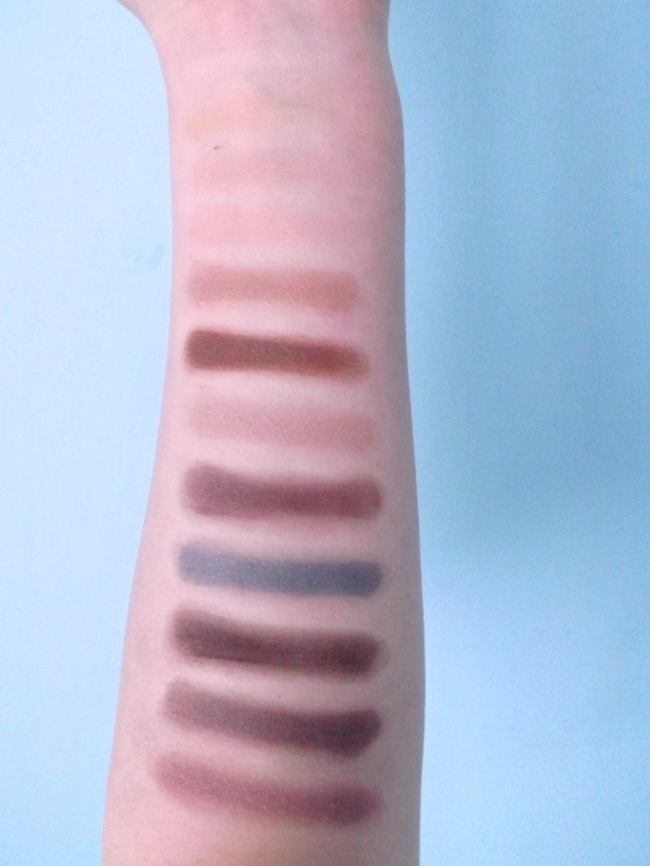 The first four shades are incredibly similar when they’re swatched, because, to be honest, the pigmentation isn’t great. My super pale skin definitely doesn’t help, but those four are quite built up in the picture and they’re still barely visible. The rest of the shades, however, are pretty awesome. The pigmentation is much better, and you can really see the colour intensity when they’re swatched. They are all quite chalky, but applied over a good primer they’re all really easy to apply and blend- and they last pretty well too, some of the lighter shades are only about four hours but for the more intense colours I can get at least six hours of wear out of them.

Overall, I think for a £4 palette, this is pretty incredible. I’m so happy that there’s finally a good drugstore, all-matte eyeshadow palette, and one that has a really pretty shade selection. What do you think of the swatches? Have you tried any of the Makeup Revolution palettes?

Available at Superdrug and Makeup Revolution. 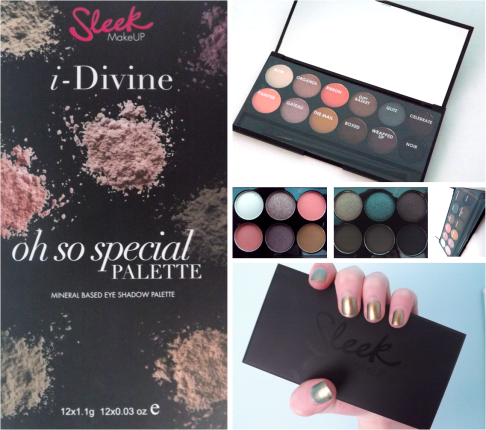 I’ve just been sitting here looking at my keyboard for about seven minutes trying to decide what to write here.

I’ve had my eye on the Oh So Special palette for about six months, and I have no idea why I’ve only just picked it up but I’m so happy I did! It’s wonderful and the colours are beautiful; it’s basically a neutral palette which isn’t boring, containing pinks, bronze-y browns and a few very dark plummy shades.

I have to talk about the names. Ribbon, Celebrate, Wrapped Up- they’re pure festive adorableness. I can’t.

The formula of the eye shadows in this palette are even better than in the Vintage Romance palette, I think that might have something to do that this palette isn’t limited edition..? I’ll just have to buy another one to find out. But they’re all really soft and blendable, with no fall out or chalkiness, which makes them so easy to use! I’m even tempted to test this theory by handing this palette to my seven year old sister and seeing what she can come up with, I just need a willing model.

These are all, literally, barely swatched. And they look like this- they’re so amazing! I think the very best ones are probably Pamper, Gateau, Ribbon, Gift Basket, Glitz and Wrapped up, purely for pigmentation. The only slight problem I have with the colour selection in this palette is that there are a few shades (The Mail, Ribbon and Pamper) which are really beautiful but I just can’t imagine I’ll wear them. I wish there was a shimmery white highlight in this palette instead, that would make it perfect for a complete everyday look.

What do you think of these colours? I think they’re really beautiful and I’ll get quite a bit of wear out of them- right now I’m wearing Organza, Boxed and Celebrate as a liner and it looks quite pretty:)

Sleek Oh So Special is £7.99 and available at Superdrug.

Quite a while ago, I reviewed Sleek’s Lagoon palette. I was totally in love with the colours, but they’re pretty outrageous and mermaid-esque so the palette kind of got pushed to the back of my makeup drawer. I forgot about Sleek for a while, but then reviews of the Vintage Romance palette started popping up everywhere and it just looks so beautiful- I decided that with my new obsession to use eyeshadow, it would only be fair if I tried this one out too.

Aren’t the names just the cutest things ever?!?

The colours in this palette are all really dark- much darker than I’m used to wearing. I do love the purple and gold tone though, so I’m going to have  to start playing around with it to make it work. I also love the formula of these shadows so much more than Lagoon- they’re much more powdery so they’re easier to apply and blend, but they’re not chalky so you don’t get too much fall out.

Look how pretty they are! Some of these shades are quite built up, but most of them are so pigmented that I barely touched them and they swatched completely opaque. I did these swatches yesterday, but I believe it was Court in Cannes, Lust in LA, Honeymoon in Hollywood, Forever in Florence, A Vow in Venice, Marry in Monte Carlo  and Love in London that had the amazing formula. I think the worst two were probably Romance in Rome and Bliss in Barcelona- I really couldn’t get those two to look as pretty swatched as they do in the pan.

Overall, I am really loving this palette. I’ve only used it a few times and I’m still trying to decide on my favourite colour combinations, but they last really well and are pretty easy to apply. This palette would be perfect for the Christmas and New Years party time of year, but hopefully I’ll be able to work out a nice everyday look for Project Use Eyeshadow!

Have you tried this, or any of the Sleek palettes?

Sleek Vintage Romance is £7.99 and available at Superdrug.

Have you heard that Urban Decay have officially confirmed the existence of a Naked 3 palette?

The rumours started quite a while ago, but then a few days ago a very lucky person managed to get hold of one that had been accidentally put on the shelves in Sephora in France. http://www.natacha-birds.fr/leblog/naked3-urban-decay/

Then there was the denial and the arguing and the claims that it was fake, but now Urban Decay have released a video proving it is real and I am very very happy. http://www.temptalia.com/urban-decay-naked3-eyeshadow-palette-coming-soon

All the hype has kind of reminded me how much I love the Naked palettes, so I decided to use Naked 2 for the second instalment of Project Use Eyeshadow. It’s taken me a long time, but I think I’ve finally chosen that this is my favourite Naked palette. That is a very scary claim, but it just has such beautiful, light shimmery shades, which I think are far easier to apply than the slightly more dark, matte tones of the first palette.

I’m still trying to learn how to apply eye shadow, so I’ve been sticking to a very basic everyday look which isn’t all that noticeable unless I close my eyes. I was going to try and put a picture in but the light is awful because it’s all rainy and dark and England. 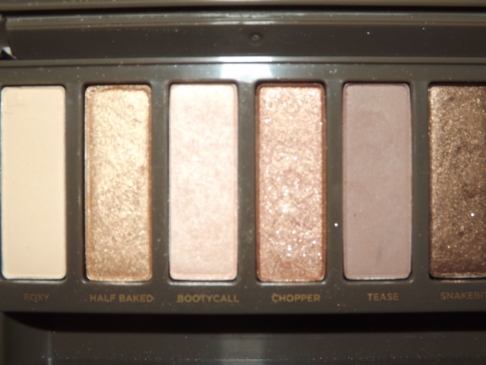 I’ve been using the brush that comes with this palette for my eye makeup for the past few days. It’s really perfect- you can use one side to apply the colour and the other to blend it out. If you have no idea what I’m talking about, you might want to have a quick look at my original review?

So, anyway, i’ve basically been applying either Bootycall or Foxy across my eyelid right up to my eyebrow, and then just using Chopper from the lashline to the crease. Next, I put a little bit of Snakebite right at the outer corner and kind of wing it out a little bit.

Then I either use Pistol or Busted in the crease, and as they’re both pretty dark I literally dab my brush in them and then use it to lightly blend everything out. Finally, I’ve been dabbing Verve right on the centre of my eyelids to keep everything really pretty and light, and then using it as an inner corner and brow bone highlight too.

And that’s it! It actually sounds much more complicated than it is, I literally just throw a few colours together, get a bit carried away and hope for the best:). These shadows are all really easy to work with, and they last at least six or seven hours on me without a primer.

Have you tried the Naked palettes? Are you planning on buying Naked 3? I think it’s supposed to be released in December, so it’s going to sell out pretty fast in the Christmas rush:)